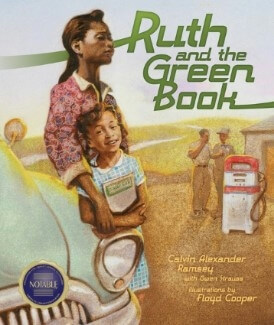 Ruth and the Green Book
by Calvin Alexander Ramsey, Illustrated by Floyd Cooper

Paperback Description:
About This Book Ruth was so excited to take a trip in her family’s new car! In the early 1950s, few Americans could afford to buy cars, so this would be an adventure. But she soon found out that black travelers weren’t treated very well in some towns. Many hotels and gas stations refused service to black people because of the Jim Crow laws. Finally, a friendly attendant at a gas station showed Ruth’s family The Green Book. It listed all of the places that would welcome black travelers. With this guidebook and the kindness of strangers, Ruth could finally make a safe journey from Chicago to her grandma’s house in Alabama. Ruth’s story is fiction, but The Green Book and its role in helping a generation of black travelers is historical fact.

From the NY Times:
The playwright and author Calvin Alexander Ramsey (left), 65, was raised in the South and now lives in New York City. He is the author of “Ruth and the Green Book,” a children’s book published in 2010, and the play “The Green Book,” first produced in 2005 and published last year in book form. He is working on a documentary called “The Green Book Chronicles.” His work was inspired by Victor Hugo Green, who from 1936 to 1964 published the Jim Crow-era “Negro Motorist Green Book” (its title was modified over time, eventually abbreviated as the “Green Book”) listing locations catering to African-American travelers in the United States, Canada, Mexico and Bermuda.

More books like Ruth and the Green Book may be found by selecting the categories below: