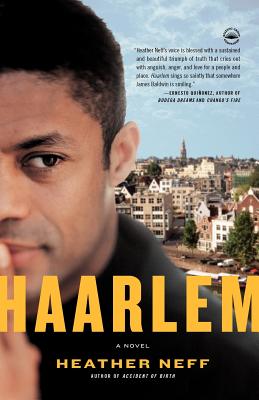 Haarlem: A Novel
by Heather Neff

Book Description:
“The only thing that’ll last forever is my Thirst . . . .”

So says Abel Crofton as he explores the streets and canals of Amsterdam. A New York tunnel worker who’s struggling to stay sober after years of alcoholism, Abel is searching for the mother he’s never known. Despite having few clues as to her whereabouts, he soon finds a bureaucratic trail that takes him to Haarlem, the Dutch town from which the famed African-American neighborhood takes its name.

As Abel ventures into more new territory, he also takes on his identity as a Black man, his rough childhood in Harlem, New York, his relationship to his bitter father, and his battle with addiction. The questions around his life only get more complicated after he meets a coldly direct waitress and a ragged jazz musician, both also bearing major scars from their pasts. The road leads to Haarlem for them as well.

Welcome to Abel’s search for salvation in another tight page turner from Heather Neff.

More books like Haarlem: A Novel may be found by selecting the categories below:

Tell us what do you think about Haarlem: A Novel.