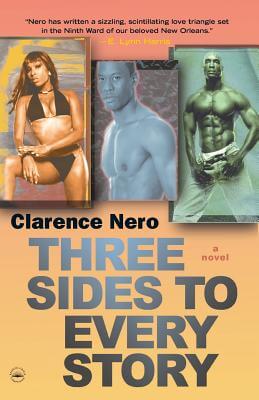 Three Sides to Every Story: A Novel
by Clarence Nero

Paperback Description:
Growing up in the Ninth Ward of New Orleans, Johnny and Tonya meet in high school and fall for each other. Yet their romance falls apart when Johnny seriously injures Tonya’s ex-boyfriend in an altercation. Johnny is imprisoned, and Tonya starts dating a rapper who fulfills her dreams of dancing in videos.

Depressed and deflated in jail, Johnny comes back to life thanks to the help of Pandora, the prison’s “den mother,” and James, who helps Johnny study for his GED. What starts as a platonic friendship between the sexually repressed Johnny and the openly gay James soon develops into a tender love that’s put on hold when James is released on parole. A year later, Johnny is freed as well, haunted by his feelings.

Meanwhile, Tonya, no longer with the rapper, has a new dream of reuniting with Johnny. And James, who wows crowds as a legendary drag queen performer, is furious that Johnny hasn’t reached out to him.

More books like Three Sides to Every Story: A Novel may be found by selecting the categories below: