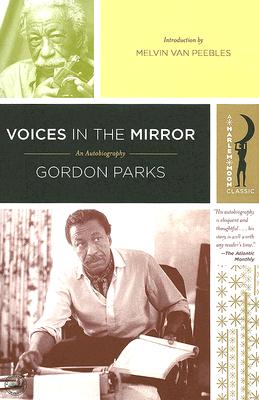 Voices in the Mirror: An Autobiography (Harlem Moon Classics)
by Gordon Parks

Book Description:
Alone after his mother’s death, homeless in a Minnesota winter, young Gordon struggled to stay in school, working at menial jobs and riding streetcars all night to escape the cold. Refusing to succumb to despair, he instead transformed his anger at poverty and racism into a creative force and went on to break down one barrier after another. He was the first black photographer at Vogue and Life, and the first black screenwriter and director in Hollywood, at the helm of such projects as the award-winning Shaft. And his novel, The Learning Tree, has sold more than a quarter of a million copies.

Spanning the major events of five decades, Voices in the Mirror takes readers from Minnesota and Washington, D.C., to the glamour of Paris and the ghettos of Rio and Harlem. His intimate portrayals of Ingrid Bergman and Roberto Rossellini; of the Muslim and African American icons Malcolm X, Elijah Muhammad and Muhammad Ali; of the young militants of the civil rights and black power movements; and of the tragic experiences of the less famous, like the Brazilian youngster Flavio, combine to form an unforgettable story.

Gordon Parks’s life is a metaphor for the courageous vision and extraordinary resilience of the African American community, while also serving as a testament to the spirit and generosity that are its hallmarks.

More books like Voices in the Mirror: An Autobiography (Harlem Moon Classics) may be found by selecting the categories below:

Tell us what do you think about Voices in the Mirror: An Autobiography (Harlem Moon Classics).