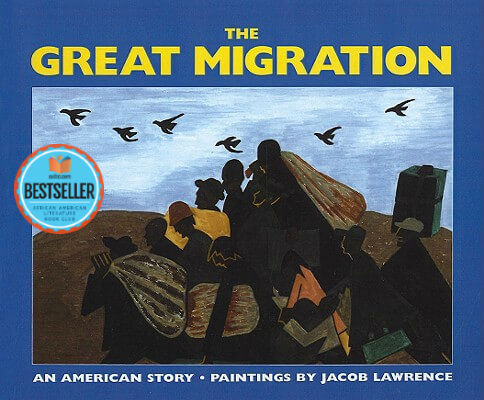 The Great Migration: An American Story
by Jacob Lawrence

Hardcover Description:
Around the time of WWI, large numbers of African Americans began leaving their homes in the rural South in search of employment in the industrial cities of the North. In 1940, Lawrence chronicled their journey of hope in a flowing narrative sequence of paintings.This stirring picture book brings together the sixty panels of Lawrence’s epic narrative Migration series, which he created in 1940-1941. They tell of the journey of African-Americans who left their homes in the South around World War I and traveled in search of better lives in the northern industrial cities. Lawrence is a storyteller with words as well as pictures: his captions and introduction to this book are the best commentary on his work. A poem at the end by Walter Dean Myers also reveals [as do the paintings] the universal in the particulars. —BL. Notable Children’s Books of 1994 (ALA) 1993 Books for Youth Editors’ Choices (BL) 1994 Teachers’ Choices (IRA) Notable 1994 Childrens’ Trade Books in Social Studies (NCSS/CBC) 1994 Carter G. Woodson Outstanding Merit Book (NCSS) 1994 Books for the Teen Age (NY Public Library)

More books like The Great Migration: An American Story may be found by selecting the categories below: