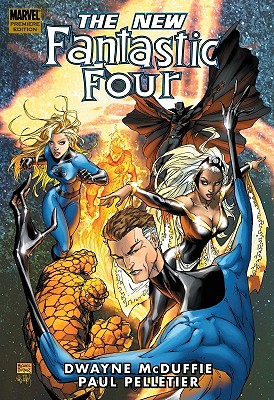 Book Description:
In the aftermath of Civil War comes Reconstruction, the beginning of a stunning new era of fantastic adventure. The team has been rocked to its foundations by the controversial events of the last several months. Now Reed and Sue have announced their plans to take some time off to work out their martial problems, leaving Ben and Johnny to hold the fort. But they won’t be doing it shorthanded. The newly married Black Panther and Storm join the team for all new adventures featuring Silver Surfer, Galactus and… a new Quasar? Collects Fantastic Four #544-549.

More books like The New Fantastic Four may be found by selecting the categories below:

Tell us what do you think about The New Fantastic Four.