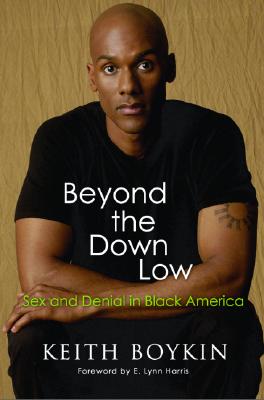 Beyond the Down Low: Sex, Lies, and Denial in Black America
by Keith Boykin

Hardcover Description:
Bolstered by national television exposure on Oprah and a cover story in the New York Times Magazine, the "down low"—a term used to refer to "straight" men who have sex with men—was thrust into the open in 2004. Keith Boykin, a former Clinton White House aide, goes beyond the hype with the first responsible, eye-opening look at the down low sensation. Unlike all previous accounts on the topic, Beyond the Down Low presents the DL not merely as a problem of gay and bisexual men living in the shadows, but more as an example of America’s unwillingness to engage in critical but uncomfortable conversations about black sexuality. Boykin details how society has helped to create an environment where black gay and bisexual men feel compelled to lead double lives. Meanwhile, the dialogue that has taken place in the black community encourages an unhealthy battle of the sexes, ignores the complexity of the closet, demonizes bisexuality, disempowers women, and misdirects public resources and attention. This book is a timely and well researched answer to the question, "Why are so many black men on the DL?" More importantly, it is an essential tool to pry open the closet door in black America.

More books like Beyond the Down Low: Sex, Lies, and Denial in Black America may be found by selecting the categories below: