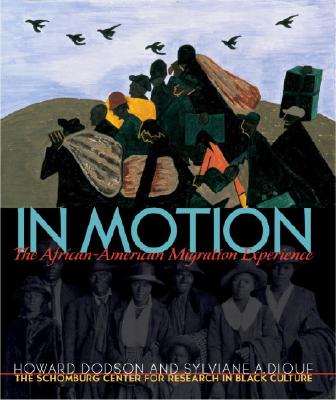 In Motion: The African-American Migration Experience
by Schomburg Center for Research in Black Culture, Howard Dodson, and Sylviane A. Diouf

Hardcover Description:
African Americans, more than any other populations in the Americas, have been shaped by migrations. Their culture and history are the products of black peoples’ various movements, coerced and voluntary, that started, in the Western Hemisphere, five hundred years ago. Theirs is the story of men and women forced out of Africa; of enslaved people moved from the coastal southeast to the Deep South; of fugitives walking to freedom across the country and beyond; of colonists leaving their land to settle on foreign shores; of southerners migrating west and north; and of immigrants arriving from the Caribbean, South America, and Africa.

Although the Atlantic slave trade has created an enduring image of black people as transported commodities, and is usually considered the single element in the construction of the African Diaspora, it is centuries of additional migrations that have given shape to the nation we know today, a nation different from that forged solely by the dreadful transportation of the Africans against their will. And it is this vast array of migrations that truly defines the African American experience. Always on the move, resourceful, and creative, men and women of African origin have been risk-takers in an exploitative and hostile environment. Their survival skills, efficient networks, and dynamic culture have enabled them to thrive and spread, and to be at the very core of the settling and development of the Americas. Their migrations have changed not only their world, and the fabric of the African Diaspora but also their nation and the Western Hemisphere.

Between 1492 and 1776, an estimated 6.5 million people migrated to the Americas. More than 5 out of 6 were Africans. The major colonial labor force, they laid the economic and cultural foundations of the continents. Their migrations continued during and after slavery. In the United States alone, 6.5 million African Americans left the South for northern and western cities between 1916 and 1970. With this internal Great Migration, the most massive in the history of the country, African Americans stopped being a southern, rural community to become a national, urban population.

The men and women of the Great Migration not only transformed the cities they settled in, but their neighborhoods became primary destinations for black people arriving from the Caribbean, Africa, and South America. These immigrants often retained their national and ethnic identities, and brought new resources into the African American community. With each wave of migration, changes in the demographic, cultural, religious, economic, and political life of the recipient communities occurred; and the nation’s development has been inextricably linked with these movements.

At the same time, from the earliest days, thousands of African Americans have left their country when it became apparent that they would not find at home the freedom and equality they aspired to. Their quest for liberty and better opportunities took them to Canada, Mexico, the Caribbean, and Africa. African American out-migration has now become insignificant, but black popular culture, created out of the diverse influences brought about by centuries of movement, resonates throughout the world in an unprecedented cultural migration.

Today’s 35 million African Americans are heirs to all the migrations that have formed, modeled, and transformed their community, the country, and the African Diaspora. They are the offspring of diverse African ethnicities who also include, in their genetic makeup, Europeans, Native Americans, and Asians. They represent the most diverse population in the nation. A population that has embraced its varied heritage built by millions of men and women constantly on the move, looking for better opportunities, starting over, paving the way, and making sacrifices for future generations.

Books similiar to In Motion: The African-American Migration Experience may be found in the categories below: