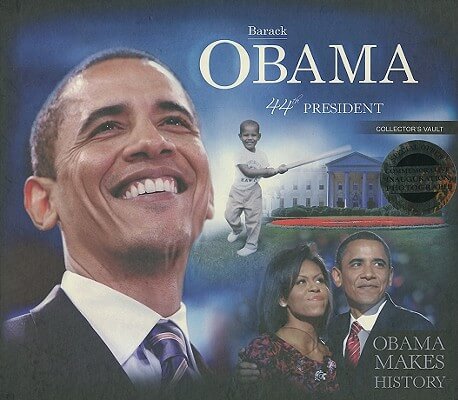 Hardcover Description:
On the night of November 4, 2008, Barack Obama addressed the nation as the first African American to be elected president of the United States. It was the end of a race that had gripped the country more than any other. Every likely candidate would be a first in the White House, whether by race (Obama) or gender (Senator Hillary Clinton, Alaska Governor, Sarah Palin). This detailed scrapbook recreates one of the most inspiring presidential races in U.S. history. Tucked among the pages is a treasure trove of memorabilia: souvenir replicas such as buttons, press passes, bumper stickers, posters, tickets, and more are set against a vivid narrative, historical photographs, and images from the campaign trail. You ll read the full text of Senator Obama s electrifying keynote address at the 2004 Democratic National Convention, and his American Promise speech from 2008, when he accepted the Democratic nomination.

More books like Barack Obama Presidential Collector’s Vault may be found by selecting the categories below: