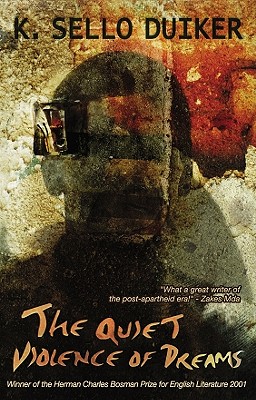 The Quiet Violence of Dreams
by K. Sello Duiker

Book Description:
The Quiet Violence of Dreams is set in Cape Town’s cosmopolitan neighborhoods - Observatory, Mowbray and Sea Point - where subcultures thrive and alternative lifestyles are tolerated. The plot revolves around Tshepo, a student at Rhodes, who gets confined to a Cape Town mental institution after an episode of ’cannabis-induced psychosis’. He escapes but is returned to the hospital and completes his rehabilitation, earns his release - and promptly terminates his studies. He now works as a waiter and shares an apartment with a newly released prisoner. The relationship with his flatmate deteriorates and Tshepo loses his job at the Waterfront. Desperate for an income, he finds work at a male massage parlour, using the pseudonym Angelo. The novel explores Tshepo-Angelo’s coming to consciousness of his sexuality, sexual orientation, and place in the world.

More books like The Quiet Violence of Dreams may be found by selecting the categories below:

Tell us what do you think about The Quiet Violence of Dreams.