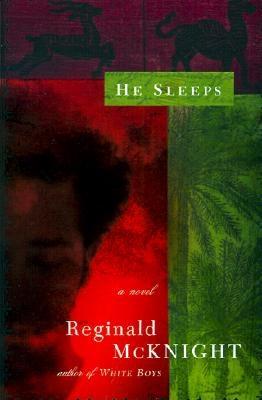 He Sleeps: A Novel
by Reginald McKnight

Hardcover Description:
In this prize-winning author’s most ambitious book to date, an African-American anthropologist trying to "find himself" in Senegal instead finds himself caught in a surreal web of deception and betrayal

Bertrand, a young African-American anthropologist, has ostensibly come to Senegal to do field research. But in truth, he left his home in Denver to gain a fresh perspective on his troubled marriage. Struggling to fit in with his new Senegalese family — Alaine, his wife Kene, and their young daughter — Bertrand finds himself, for the first time in his life, haunted by surreal and increasingly violent dreams. His waking hours are no less sinister; unwittingly, it seems, Bertrand has become caught in the tension — sexual and otherwise — building between the married couple. His relations with the rest of the village community are also strained; he can’t escape the sensation that he’s being set up for a grand-scale betrayal. As his sense of isolation and alienation escalates, he comes to believe that not only his fragile sense of identity — but his very life — is at stake.
A riveting tour de force, He Sleeps confirms Reginald McKnight’s status as a writer of vivid imagination and exceptional talent.

More books like He Sleeps: A Novel may be found by selecting the categories below: