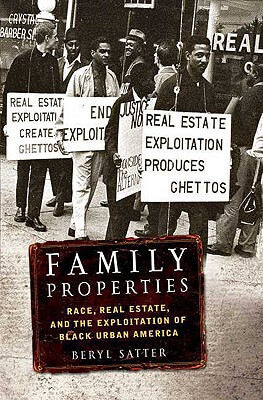 Read Our Review of Family Properties: Race, Real Estate, And The Exploitation Of Black Urban America

Hardcover Description:
Part family story and part urban history, a landmark investigation of segregation and urban decay in Chicago—and cities across the nationThe "promised land" for thousands of Southern blacks, postwar Chicago quickly became the most segregated city in the North, the site of the nation’s worst ghettos and the target of Martin Luther King Jr.’s first campaign beyond the South. In this powerful book, Beryl Satter identifies the true causes of the city’s black slums and the ruin of urban neighborhoods throughout the country: not, as some have argued, black pathology, the culture of poverty, or white flight, but a widespread and institutionalized system of legal and financial exploitation. In Satter’s riveting account of a city in crisis, unscrupulous lawyers, slumlords, and speculators are pitched against religious reformers, community organizers, and an impassioned attorney who launched a crusade against the profiteers—the author’s father, Mark J. Satter. At the heart of the struggle stand the black migrants who, having left the South with its legacy of sharecropping, suddenly find themselves caught in a new kind of debt peonage. Satter shows the interlocking forces at work in their oppression: the discriminatory practices of the banking industry; the federal policies that created the country’s shameful "dual housing market"; the economic anxieties that fueled white violence; and the tempting profits to be made by preying on the city’s most vulnerable population. A monumental work of history, this tale of racism and real estate, politics and finance, will forever change our understanding of the forces that transformed urban America.

More books like Family Properties: Race, Real Estate, And The Exploitation Of Black Urban America may be found by selecting the categories below: