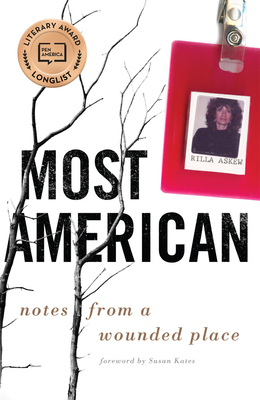 Most American: Notes from a Wounded Place
by Rilla Askew

Paperback Description:
2018 PEN America Literary Award Finalist! In her first nonfiction collection, award-winning novelist Rilla Askew casts an unflinching eye on American history, both past and present. As she traverses a line between memoir and social commentary, Askew places herself—and indeed all Americans—in the role of witness to uncomfortable truths about who we are. Through nine linked essays, Most American: Notes from a Wounded Place evokes a vivid impression of the United States: police violence and gun culture, ethnic cleansing and denied history, spellbinding landscapes and brutal weather. To render these conditions in the particulars of place, Askew spotlights the complex history of her home state. From the Trail of Tears to the Tulsa Race Riot to the Murrah Federal Building bombing, Oklahoma appears as a microcosm of our national saga. Yet no matter our location, Askew argues, we must own our contradictory selves—our violence and prejudices, as well as our hard work and generosity—so the wounds of division in our society can heal. In these writings, Askew traces a personal journey that begins with her early years as an idealistic teenager mired in what she calls "the presumption of whiteness." Later she emerges as a writer humble enough to see her own story as part of a larger historical and cultural narrative. With grace and authority she speaks honestly about the failures of the dominant culture in which she grew up, even as she expresses a sense of love for its people. In the wake of increasing gun violence and heightened national debate about race relations and social inequality, Askew’s reflections could not be more relevant. With a novelist’s gift for storytelling, she paints a compelling portrait of a place and its people: resilient and ruthless, decent but self-deceiving, generous yet filled with prejudice—both the best and the worst of what it means to be American.

More books like Most American: Notes from a Wounded Place may be found by selecting the categories below: