Read Our Review of Race Matters

The twenty-fifth-anniversary edition of the groundbreaking classic, with a new introduction 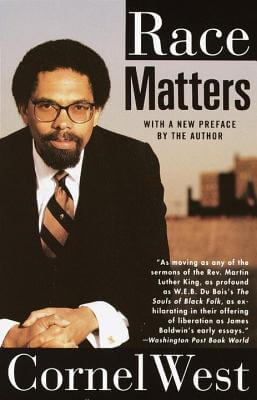 First published in 1993, on the one-year anniversary of the Los Angeles riots, Race Matters became a national best seller that has gone on to sell more than half a million copies. This classic treatise on race contains Dr. West’s most incisive essays on the issues relevant to black Americans, including the crisis in leadership in the Black community, Black conservatism, Black-Jewish relations, myths about Black sexuality, and the legacy of Malcolm X. The insights Dr. West brings to these complex problems remain relevant, provocative, creative, and compassionate.

In a new introduction for the twenty-fifth-anniversary edition, Dr. West argues that we are in the midst of a spiritual blackout characterized by imperial decline, racial animosity, and unchecked brutality and terror as seen in Baltimore, Ferguson, and Charlottesville. Calling for a moral and spiritual awakening, Dr. West finds hope in the collective and visionary resistance exemplified by the Movement for Black Lives, Standing Rock, and the Black freedom tradition.

Now more than ever, Race Matters is an essential book for all Americans, helping us to build a genuine multiracial democracy in the new millennium.

Original Description: “…the groundbreaking classic Race Matters affirms its position as the bestselling, most influential, and most original articulation of the urgent issues in America?s ongoing racial debate.

Cornel West is at the forefront of thinking about race. In Race Matters he addresses a range of issues, from the crisis in black leadership and the myths surrounding black sexuality to affirmative action, the new black conservatism, and the strained relations between Jews and African Americans. He never hesitates to confront the prejudices of all his readers?or wavers in his insistence that they share a common destiny. Bold in its thought and written with a redemptive passion grounded in the tradition of the African-American church, Race Matters is a book that is at once challenging and deeply healing.”

Books similiar to Race Matters may be found in the categories below: