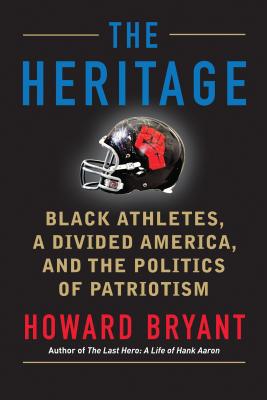 The Heritage: Black Athletes, a Divided America, and the Politics of Patriotism
by Howard Bryant

Book Description:
Following in the footsteps of Robeson, Ali, Robinson and others, today’s Black athletes re-engage with social issues and the meaning of American patriotism

For most of the twentieth century, "No News on the Sports Page" governed how sports were played and perceived in America. The ballfield was a sanctuary from real-world problems. Today, that is a naive notion.

The reasons are complex. But among them, post 9/11, sports arenas transformed into staging grounds for American patriotism and pride. As America dealt with terrorism at home, hero-worship of law enforcement took center stage. Police officers threw out first pitches; soldiers’ surprise homecomings became a staple at half time; and teams wore camouflage jerseys to honor those who served. Any critique of police or military authority looked unpatriotic, even when the authority deserved criticism.

This paradigm shift activated a long-dormant force not seen in several decades: the black athlete as a figure of resistance. In The Heritage, sports journalist Howard Bryant observes how the tradition of neutrality on the pitch has given way to a new generation of activist-athletes. It is the story of the rise, fall, and return of "athlevists" who refuse to "shut up and play." It is a heritage built by the superstardom and radical politics of Jackie Robinson, Muhammad Ali, Tommie Smith, and John Carlos in the 1960s; undermined by apolitical, corporation-friendly "transcenders of race" O.J. Simpson, Michael Jordan, and Tiger Woods, in the following decades; and reclaimed today by the likes of LeBron James, Colin Kaepernick, and Carmelo Anthony in the wake of Ferguson and Freddie Gray. Revealing and incisive, Bryant deftly shows how sports is colliding with political culture, and how athletes, teams and leagues are melding the two.

More books like The Heritage: Black Athletes, a Divided America, and the Politics of Patriotism may be found by selecting the categories below: