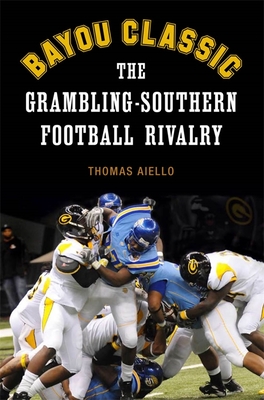 The annual clash in New Orleans between the Grambling State University Tigers and the Southern University Jaguars represents the fiercest and most anticipated in-state football rivalry in Louisiana. The most significant national game to feature historically black colleges and universities is more than a contest; the Bayou Classic is a lavish event, featuring celebrities, a fan festival, and a halftime Battle of the Bands that offers an intensity equal to that of the gridiron. In Bayou Classic, Thomas Aiello chronicles the history of the game and explores the two schools’ broader significance to Louisiana, to sports, and to the black community.

When the Southern University Bushmen football team traveled to Monroe, Louisiana, to play the Tigers of Louisiana Negro Normal and Industrial Institute for the first time on Armistice Day, 1932, few realized they were witnessing the birth of a phenomenon. Aiello recounts Southern’s early dominance over the smaller, two-year institution; Southern’s acceptance into the Southwestern Athletic Conference; Grambling’s hiring of the legendary Eddie Robinson, who would lead the Tigers to 408 wins between 1941 and 1997; Grambling’s first victory over Southern; and years of alternating home and away games. In 1974, the rivalry found a neutral site in New Orleans — first at Tulane Stadium and then the Superdome — and became the Bayou Classic. An NBC television contract introduced the Bayou Classic to a nationwide audience and completed the transformation of the game into a major event. The Bayou Classic remains the only nationally broadcast game between two historically black schools. Aiello supplements his colorful narrative with period photographs and informative appendices providing game results, statistics, and all-star teams from every year the schools have played.

To appreciate the rivalry, Coach Eddie Robinson once noted, you have to realize Grambling and Southern fans are close friends, as well as relatives. Bayou Classic offers a splendid history for fans, friends, and those who want to know more about this special game.