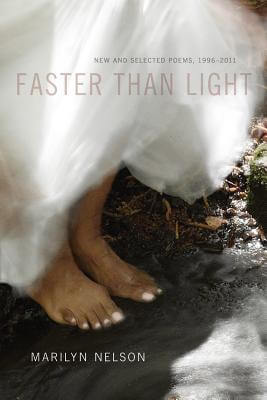 Faster Than Light: New And Selected Poems, 1996-2011
by Marilyn Nelson

Paperback Description:
Conjuring numerous voices and characters across oceans and centuries, Faster Than Light explores widely disparate experiences through the lens of traditional poetic forms. This volume contains a selection of Marilyn Nelson’s new and uncollected poems as well as work from each of her lyric histories of eighteenth-, nineteenth-, and twentieth-century African American individuals and communities.Poems include the stories of historical figures like Emmett Till, the fourteen-year-old boy lynched in 1955, and the inhabitants of Seneca Village, an African American community razed in 1857 for the creation of Central Park. "Bivouac in a Storm" tells the story of a group of young soldiers, later known as the Tuskegee Airmen, as they trained near Biloxi, Mississippi, "marching in summer heat / thick as blackstrap molasses, under trees / haunted by whippings." Later pieces range from the poet’s travels in Africa, Europe, and Polynesia, to poems written in collaboration with Father Jacques de Foiard Brown, a former Benedictine monk and the subject of Nelson’s playful fictional fantasy sequence, "Adventure-Monk!" Both personal and historical, these poems remain grounded in everyday details but reach toward spiritual and moral truths.

More books like Faster Than Light: New And Selected Poems, 1996-2011 may be found by selecting the categories below: