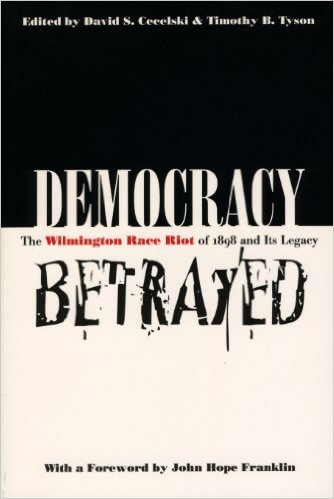 Democracy Betrayed: The Wilmington Race Riot of 1898 and Its Legacy
by Timothy B. Tyson

At the close of the nineteenth century, the Democratic Party in North Carolina engineered a white supremacy revolution. Frustrated by decades of African American self-assertion and threatened by an interracial coalition advocating democratic reforms, white conservatives used violence, demagoguery, and fraud to seize political power and disenfranchise black citizens. The most notorious episode of the campaign was the Wilmington “race riot” of 1898, which claimed the lives of many black residents and rolled back decades of progress for African Americans in the state.

Published on the centennial of the Wilmington race riot, Democracy Betrayed draws together the best new scholarship on the events of 1898 and their aftermath. Contributors to this important book hope to draw public attention to the tragedy, to honor its victims, and to bring a clear and timely historical voice to the debate over its legacy.

More books like Democracy Betrayed: The Wilmington Race Riot of 1898 and Its Legacy may be found by selecting the categories below: