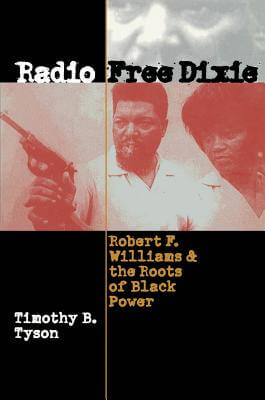 Radio Free Dixie: Robert F. Williams and the Roots of Black Power
by Timothy B. Tyson

This book tells the remarkable story of Robert F. Williams—one of the most influential black activists of the generation that toppled Jim Crow and forever altered the arc of American history. In the late 1950s, as president of the Monroe, North Carolina, branch of the NAACP, Williams and his followers used machine guns, dynamite, and Molotov cocktails to confront Klan terrorists. Advocating "armed self-reliance" by blacks, Williams challenged not only white supremacists but also Martin Luther King Jr. and the civil rights establishment. Forced to flee during the 1960s to Cuba—where he broadcast "Radio Free Dixie," a program of black politics and music that could be heard as far away as Los Angeles and New York City—and then China, Williams remained a controversial figure for the rest of his life.

Historians have customarily portrayed the civil rights movement as a nonviolent call on America’ s conscience—and the subsequent rise of Black Power as a violent repudiation of the civil rights dream. But Radio Free Dixie reveals that both movements grew out of the same soil, confronted the same predicaments, and reflected the same quest for African American freedom. As Robert Williams’ s story demonstrates, independent black political action, black cultural pride, and armed self-reliance operated in the South in tension and in tandem with legal efforts and nonviolent protest.

More books like Radio Free Dixie: Robert F. Williams and the Roots of Black Power may be found by selecting the categories below: