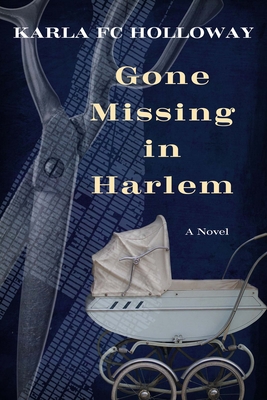 “With an evocative mix of questions and revelations, Gone Missing in Harlem shows a vivid sense of the lost and found. Karla FC Holloway again gives us the rich layers of Weldon Thomas’s detective work. Migration, abduction, and striving create the sense of wonder that fuels this resonant novel.” —Ravi Howard, author of Driving the King: A Novel

In her anticipated second novel, Karla Holloway evokes the resilience of a family whose journey traces the river of America’s early twentieth century. The Mosby family, like other thousands, migrate from the loblolly-scented Carolinas north to the Harlem of their aspirations—with its promise of freedom and opportunities, sunlit boulevards, and elegant societies.

The family arrives as Harlem staggers under the flu pandemic that follows the First World War. DeLilah Mosby and her daughter, Selma, meet difficulties with backbone and resolve to make a home for themselves in the city, and Selma has a baby, Chloe. As the Great Depression creeps across the world at the close of the twenties, however, the farsighted see hard times coming.

The panic of the early thirties is embodied in the kidnapping and murder of the infant son of the nation’s dashing young aviator, Charles Lindbergh. A transfixed public follows the manhunt in the press and on the radio. Then Chloe goes missing—but her disappearance does not draw the same attention. Wry and perceptive Weldon Haynie Thomas, the city’s first “colored” policeman, takes the case.

The urgent investigation tests Thomas’s abilities to draw out the secrets Harlem harbors, untangling the color-coded connections and relationships that keep company with greed, ghosts, and grief. With nuanced characters, lush historical detail, and a lyrical voice, Gone Missing in Harlem affirms the restoring powers of home and family.

More books like Gone Missing in Harlem may be found by selecting the categories below: