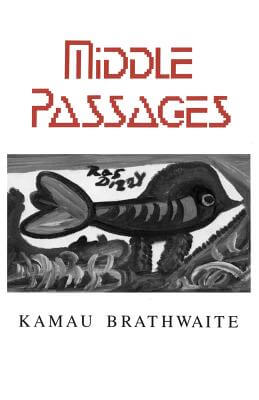 Book Description:
MiddlePassages is an offshoot of the author’s second trilogy, ’a splice of time & space’, as he puts it, between his/father’s world of Sun Poem and ’the magical irrealism’ of X/Self. With his other ’shorter’ collections Black + Blues and Third World Poems, MiddlePassages creates a kind of chisel which may well lead us into a projected third trilogy. Here is a political angle to Brathwaite’s Caribbean & New World quest, with new notes of protest and lament. It marks a Sisyphean stage of Third World history in which things fall apart and everyone’s achievements come tumbling back down upon their heads and into their hearts, like the great stone which King Sisyphus was condemned to keep heaving back up the same hill in hell - a postmodernist implosion already signalled by Baldwin, Patterson, Soyinka and Achebe and more negatively by V.S. Naipaul; but given a new dimension here by Brathwaite’s rhythmical and ’video’ affirmations. And so MiddlePassages includes poems for those modern heroes who are the pegs by which the mountain must be climbed again: Maroon resistance, the poets Nicolas Guillen, the Cuban revolutionary, and Mikey Smith, stoned to death on Stony Hill; the great musicians (Ellington, Bessie Smith); and Third World leaders Kwame Nkrumah, Walter Rodney and Nelson Mandela.

More books like Middle Passages may be found by selecting the categories below:

Tell us what do you think about Middle Passages.