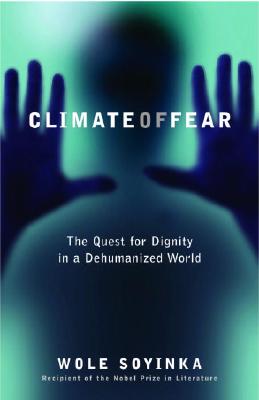 Climate Of Fear: The Quest For Dignity In A Dehumanized World (Reith Lectures)
by Wole Soyinka

Book Description:
In this new book developed from the prestigious Reith Lectures, Nobel Prize—winning author Wole Soyinka, a courageous advocate for human rights around the world, considers fear as the dominant theme in world politics.

Decades ago, the idea of collective fear had a tangible face: the atom bomb. Today our shared anxiety has become far more complex and insidious, arising from tyranny, terrorism, and the invisible power of the “quasi state.” As Wole Soyinka suggests, the climate of fear that has enveloped the world was sparked long before September 11, 2001.

Rather, it can be traced to 1989, when a passenger plane was brought down by terrorists over the Republic of Niger. From Niger to lower Manhattan to Madrid, this invisible threat has erased distinctions between citizens and soldiers; we’re all potential targets now.

In this seminal work, Soyinka explores the implications of this climate of fear: the conflict between power and freedom, the motives behind unthinkable acts of violence, and the meaning of human dignity. Fascinating and disturbing, Climate of Fear is a brilliant and defining work for our age.

More books like Climate Of Fear: The Quest For Dignity In A Dehumanized World (Reith Lectures) may be found by selecting the categories below:

Tell us what do you think about Climate Of Fear: The Quest For Dignity In A Dehumanized World (Reith Lectures).