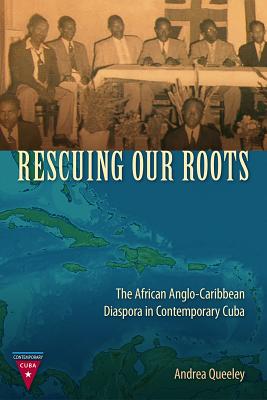 Rescuing Our Roots: The African Anglo-Caribbean Diaspora in Contemporary Cuba
by Andrea Queeley

Book Description:
“Provides invaluable insight into the histories and lives of Cubans who trace their origins to the Anglo-Caribbean.”—Robert Whitney, author of State and Revolution in Cuba: Mass Mobilization and Political Change, 1920 1940

“Adds a missing piece to the existing literature about the renewal of black activism in Cuba, all the while showing the links and fractures between pre- and post-1959 society.”—Devyn Spence Benson, Davidson College.

In the early twentieth century, laborers from the British West Indies immigrated to Cuba, attracted by employment opportunities. The Anglo-Caribbean communities flourished, but after 1959, many of their cultural institutions were dismantled: the revolution dictated that in the name of unity there would be no hyphenated Cubans. This book turns an ethnographic lens on their descendants who—during the Special Period in the 1990s—moved to “rescue their roots” by revitalizing their ethnic associations and reestablishing ties outside the island.

Based on Andrea J. Queeley’s fieldwork in Santiago and Guant namo, Rescuing Our Roots looks at local and regional identity formations as well as racial politics in revolutionary Cuba. Queeley argues that, as the island experienced a resurgence in racism due in part to the emergence of the dual economy and the reliance on tourism, Anglo-Caribbean Cubans revitalized their communities and sought transnational connections not just in the hope of material support but also to challenge the association between blackness, inferiority, and immorality. Their desire for social mobility, political engagement, and a better economic situation operated alongside the fight for black respectability.

Unlike most studies of black Cubans, which focus on Afro-Cuban religion or popular culture, Queeley’s penetrating investigation offers a view of strategies and modes of black belonging that transcend ideological, temporal, and spatial boundaries.

A volume in the series Contemporary Cuba, edited by John M. Kirk

More books like Rescuing Our Roots: The African Anglo-Caribbean Diaspora in Contemporary Cuba may be found by selecting the categories below:

Tell us what do you think about Rescuing Our Roots: The African Anglo-Caribbean Diaspora in Contemporary Cuba.