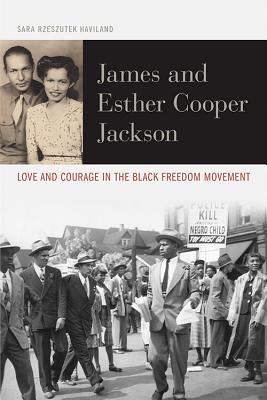 James Jackson and Esther Cooper Jackson grew up understanding that opportunities came differently for blacks and whites, men and women, rich and poor. In turn, they devoted their lives to the fight for equality, serving as career activists throughout the Black freedom movement. Having grown up in Virginia during the depths of the Great Depression, the Jacksons also saw a path to racial equality through the Communist Party. This choice in political affiliation would come to shape and define not only their participation in the black freedom movement but also the course of their own marriage as the Cold War years unfolded.

In this dual biography, Sara Rzeszutek examines the couple’s political involvement as well as the evolution of their personal and public lives in the face of ever-shifting contexts. She documents the Jacksons’ significant contributions to the early civil rights movement, discussing their time leading the Southern Negro Youth Congress, which laid the groundwork for youth activists in the 1960s; their numerous published writings in periodicals such as Political Affairs; and their editorial involvement in The Worker and the civil rights magazine Freedomways.

Drawing upon a rich collection of correspondence, organizational literature, and interviews with the Jacksons themselves, Haviland follows the couple through the years as they bore witness to economic inequality, war, political oppression, and victory in the face of injustice. Her study reveals a portrait of a remarkable pair who lived during a transformative period of American history and whose story offers a vital narrative of persistence, love, and activism across the long arc of the black freedom movement.