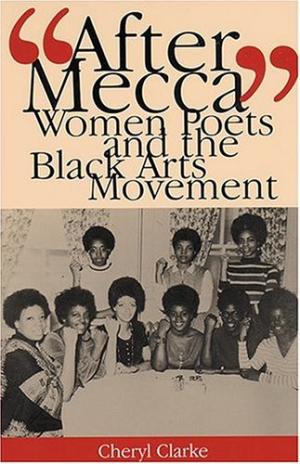 “After Mecca”: Women Poets and the Black Arts Movement
by Cheryl Clarke

Hardcover Description:
The politics and music of the sixties and early seventies have been the subject of scholarship for many years, but it is only very recently that attention has turned to the cultural production of African American poets.
In "After Mecca," Cheryl Clarke explores the relationship between the Black Arts Movement and black women writers of the period. Poems by Gwendolyn Brooks, Ntozake Shange, Audre Lorde, Nikki Giovanni, Sonia Sanchez, Jayne Cortez, Alice Walker, and others chart the emergence of a new and distinct black poetry and its relationship to the black community’s struggle for rights and liberation. Clarke also traces the contributions of these poets to the development of feminism and lesbian-feminism, and the legacy they left for others to build on.
She argues that whether black women poets of the time were writing from within the movement or writing against it, virtually all were responding to it. Using the trope of "Mecca," she explores the ways in which these writers were turning away from white, western society to create a new literacy of blackness.Provocatively written, this book is an important contribution to the fields of African American literary studies and feminist theory.

More books like “After Mecca”: Women Poets and the Black Arts Movement may be found by selecting the categories below: