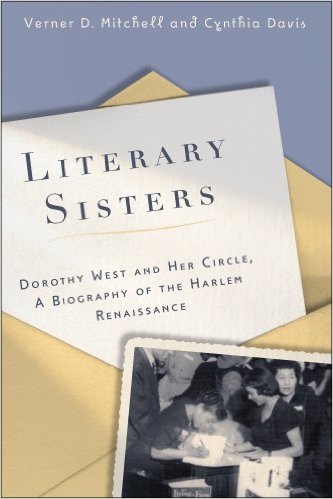 Literary Sisters: Dorothy West And Her Circle, A Biography Of The Harlem Renaissance
by Verner D. Mitchell and Cynthia Davis

Paperback Description:
Harlem Renaissance writer Dorothy West led a charmed life in many respects. Born into a distinguished Boston family, she appeared in Gershwin’s Porgy and Bess, then lived in the Soviet Union with a group that included Langston Hughes, to whom she proposed marriage. She later became friends with Jacqueline Kennedy Onassis, who encouraged her to finish her second novel, The Wedding, which became the octogenarian author’s first bestseller.Literary Sisters reveals a different side of West’s personal and professional lives—her struggles for recognition outside of the traditional literary establishment, and her collaborations with talented African American women writers, artists, and performers who faced these same problems. West and her “literary sisters”—women like Zora Neale Hurston and West’s cousin, poet Helene Johnson—created an emotional support network that also aided in promoting, publishing, and performing their respective works. Integrating rare photos, letters, and archival materials from West’s life, Literary Sisters is not only a groundbreaking biography of an increasingly important author but also a vivid portrait of a pivotal moment for African American women in the arts.

More books like Literary Sisters: Dorothy West And Her Circle, A Biography Of The Harlem Renaissance may be found by selecting the categories below: