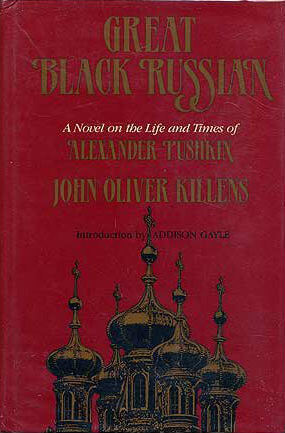 Great Black Russian: A Novel On The Life And Times Of Alexander Pushkin (African American Life)
by John O. Killens

Hardcover Description:
Alexander Pushkin was born into nineteenth-century czarist Russia at a time when the state and the church were supreme. The aristocracy was enamored of French culture and peasants were little more than slaves. The literati generally regarded the Russian language as ill fit for creative expression until Pushkin proved otherwise. His writing challenged the authority of the czar while his own wanton values gave rise to troubling guilt. Yet in his short and tumultuous lifetime, Pushkin rose to great prominence as Russia’s most important poet and literary figure. In Great Black Russian, John Oliver Killens renders a sweeping fictional account of Alexander Pushkin, drawing on the conflicts, both internal and external, that continually assailed him. Of particular significance is Pushkin’s African heritage on his mother’s side. His great-grandfather, Ibrahim Hannibal, was an Ethiopian prince captured as a youth by Turks. Acquired not long after by the czar as an adornment for his court, the young man became known as "the Negro of Peter the Great" and was eventually named a general in the czar’s army. Under the ancestral tutelage of his beloved maternal grandmother, Pushkin took pride in his African lineage. Yet he was ever conscious that it relegated him to the margins of society. Moreover, Pushkin suffered genuine emotional abuse at the hand of his mother for being the darkest, most Africanoid of her four children. Other tensions were also at play in Pushkin. His antagonism toward the absolute power of the czar, expressed in his earlier works led to surveillance and censorship by the government and contributed to his love-hate relationship with his homeland. His heavy drinking and excessive womanizing troubled him since this aristocratic profligacy conflicted with his desire for social reform. His wife’s well-known love affair with a young Frenchman precipitated a duel that ended his life. Killens weaves all of this into his compelling narrative to present a Pushkin whose varied feelings range from compassion and concern for others to bouts of depression and despair. Part Russian, part African, a poet, and a womanizer, the Alexander Pushkin of Killen’s Great Black Russian romances change, revolution, and danger and yet in his interior turmoil withdraws into the realm of dreams and fantasy.

More books like Great Black Russian: A Novel On The Life And Times Of Alexander Pushkin (African American Life) may be found by selecting the categories below: