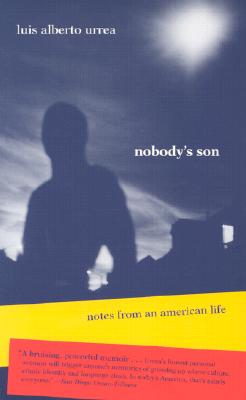 Paperback Description:
Here’s a story about a family that comes from Tijuana and settles into the ’hood, hoping for the American Dream.
. . . I’m not saying it’s our story. I’m not saying it isn’t. It might be yours. "How do you tell a story that cannot be told?" writes Luis Alberto Urrea in this potent memoir of a childhood divided. Born in Tijuana to a Mexican father and an Anglo mother from Staten Island, Urrea moved to San Diego when he was three. His childhood was a mix of opposites, a clash of cultures and languages. In prose that seethes with energy and crackles with dark humor, Urrea tells a story that is both troubling and wildly entertaining. Urrea endured violence and fear in the black and Mexican barrio of his youth. But the true battlefield was inside his home, where his parents waged daily war over their son’s ethnicity. "You are not a Mexican!" his mother once screamed at him. "Why can’t you be called Louis instead of Luis?" He suffers disease and abuse and he learns brutal lessons about machismo. But there are gentler moments as well: a simple interlude with his father, sitting on the back of a bakery truck; witnessing the ultimate gesture of tenderness between the godparents who taught him the magical power of love. "I am nobody’s son. I am everybody’s brother," writes Urrea. His story is unique, but it is not unlike thousands of other stories being played out across the United States, stories of other Americans who have waged war—both in the political arena and in their own homes—to claim their own personal and cultural identity. It is a story of what it means to belong to a nation that is sometimes painfully multicultural, where even the language both separates and unites us. Brutally honest and deeply moving, Nobody’s Son is a testament to the borders that divide us all.

More books like Nobody’s Son: Notes from an American Life may be found by selecting the categories below: