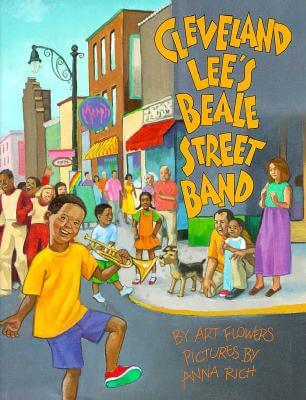 When Cleveland Lee says he wants to play trumpet in his sister’s marching band, everyone laughs and says he’s too young. Then one of the grand old bluesmen of Beale Street show Cleveland how to play music straight from his heart—and all of Memphis takes notice. Vibrant paintings pulse to the beat of the rhythmic text, making this a memorable tribute to the birthplace of the blues. Full color.

The engaging text describes the apartheid South in Martin Luther King’s time, which in many ways was not very different from the early days of slavery. Included are descriptions of the Montgomery Bus Boycott; the formation of civil rights groups; mass movements against segregation, such as the Albany Movement and the Children’s Crusade in Birmingham, after which King became black America’s acknowledged leader; and the influence on King of Gandhi, with his nonviolent approach to resistance. We are told about King’s personal struggles as well as the political challenges he faced with the rise of Malcolm X and Black Power. Flowers’ text concludes with a brief look at his legacy.

Arthur Flowers tells a masterful story in musical prose, based on griot oral storytelling traditions, bringing his own perspective to the events he describes, while Manu Chitrakar carries the tale into the vivid idiom of Patua art, turning King’s historic journey into a truly universal legacy.

Includes editorial notes, a description of how this extraordinary cross-cultural book came to be, and a note on Patua art.

More books like Cleveland Lee’S Beale St. Band may be found by selecting the categories below:

Tell us what do you think about Cleveland Lee’S Beale St. Band.