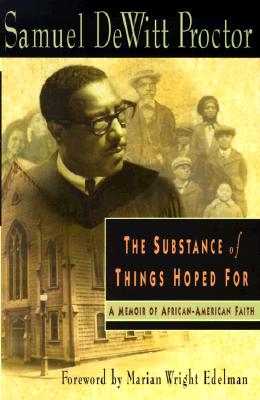 The Substance of Things Hoped for: A Memoir of African-American Faith
by Samuel D. Proctor

Paperback Description:
Honored by universities, ministries, and institutions nationwide, called into service in the administration of two presidents, Samuel DeWitt Proctor, Th.D. has established himself as a preeminent theologian, orator, and educator in this country. In The Substance of Things Hoped For, he takes us on a personal journey that begins with his grandparents’ slavery and which ends with his vision of a full fruition of the African-American experience, and a celebration of the tie that holds African-American together: simple, tenacious faith. A child of the segregation-era south, Proctor is no stranger to unwarranted hatred and widespread ignorance. He has fought against racism all his life — in his schools, in his communities, and at the pulpit. In this compelling memoir, he candidly reveals the tumult of the civil rights movement in which he was deeply involved, the bitterness and anger of youths then that has exploded into the hopelessness, rage and despair of today’s youths who feel they have no future. But through all of these times, Dr. Proctor has always been a beacon of hope; here, he recounts those inspiring times when his faith has shined brightest. One man’s positive plan for today’s society, The Substance of Things Hoped For is inspiration at its most heartfelt, delivered with warmth and conviction, and founded in a lifetime of faith and reflection.

More books like The Substance of Things Hoped for: A Memoir of African-American Faith may be found by selecting the categories below: