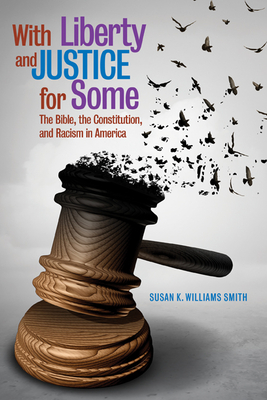 With Liberty and Justice for Some: The Bible, the Constitution, and Racism in America
by Susan K. Williams Smith

In this provocative new book from prophetic preacher and pastor Susan Williams Smith, the author tackles the truths that the church in the United States has long held to be self-evident-that ours is one nation under God, that our U.S. Constitution is (almost) as infallible as the Holy Bible, and that democracy and its principles of justice for all are sacrosanct and protected by both God and government. Yet, history and headlines alike expose the fallacy of those assumptions, particularly when viewed in the light of a national culture of white supremacy and systemic racial injustice. In fact, Smith argues, the two texts we count as sacred have not been merely impotent in eliminating racism; they have been used to support and sustain white supremacy. This important work examines how our foundational documents have failed people of color and asks the question, Can those whom a nation has considered "we the problem" ever become "we the people" who are celebrated in the Preamble to the Constitution? What will it take to reclaim the transforming and affirming power of God and government to secure liberty and justice for all?

More books like With Liberty and Justice for Some: The Bible, the Constitution, and Racism in America may be found by selecting the categories below: