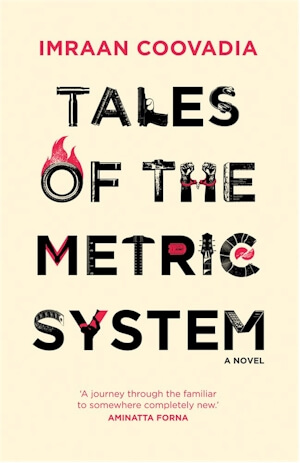 Tales of the Metric System: A Novel
by Imraan Coovadia

Paperback Description:
?On the borders there were new guerrilla armies. The rouble and the dollar had replaced the pound sterling. The kilometre and the kilogram and the litre were new ways of measuring miles and imperial pounds and fluid ounces. In Zaire, Patrice Lumumba had been murdered on the instruction of the White House.??The measurements made by Curzon College were as outdated as yards and inches. They didn’t know what counted.”

In Tales of the Metric System, Imraan Coovadia’s sere, direct sentences light a fire as he parses South Africa across the decades, from 1970 into the present. As Salman Rushdie used Indian independence in Midnight’s Children, Coovadia takes his homeland’s transition from imperial to metric measurements as his catalyst, holding South Africa up to the light and examining it from multiple perspectives. An elite white housewife married to a radical intellectual; a rock guitarist; the same guitarist’s granddaughter thirty years later; a teenaged boy at the mercy of mob justice???each story takes place over one of ten days across the decades, and each protagonist has his own stakes, her own moment in time, but each is equally caught in the eddies of change. Tales of the Metric System is clear eyed, harrowing, and formally daring.

More books like Tales of the Metric System: A Novel may be found by selecting the categories below: