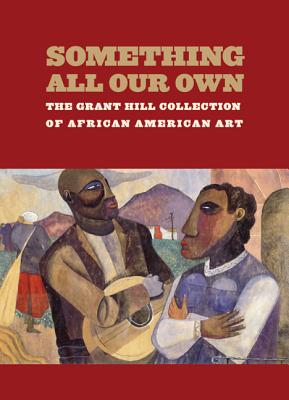 Something All Our Own: The Grant Hill Collection of African American Art
by Grant Hill

Paperback Description:
Since 1990, Grant Hill has thrilled sports fans with his artistry on the basketball court, first as an All-American player at Duke University and then as a six-time NBA All-Star for the Detroit Pistons and the Orlando Magic. During these years, Hill has amassed a collection of art by African Americans that he now shares with the public through this book, which accompanies a traveling exhibition.
The forty-six pieces documented here include thirteen works that span the career of the great Romare Bearden, from his 1941 gouache painting Serenade to the important collages of the 1980s. Hill’s fascination with artists’ depiction of women is represented in Elizabeth Catlett’s lithographs, many of them from the 1992 series “For My People,” and her sculptures in stone, bronze, and onyx. In addition to these two giants of twentieth-century art, the Hill Collection features pieces by Phoebe Beasley, Arthello Beck Jr., John Biggers, Malcolm Brown, John Coleman, Edward Jackson, and Hughie Lee Smith.
Hill began collecting art in the early 1990s after learning from his parents to appreciate artworks not only as objects of beauty but as expressions of heritage and culture. According to the internationally known curator Alvia J. Wardlaw, he is part of an emerging group of young African American collectors who have “raised the bar for others.” Hill writes, “Getting to know yourself means understanding your background and appreciating those who have come before you. My father has a saying he uses in speeches: ‘To be ignorant of your past is to remain a boy. ‘The interest in my heritage as an African American is reflected in this collection.”
Something All Our Own features Wardlaw’s essay on the history of African American collecting. It also features articles about Bearden and Catlett by the scholars Elizabeth Alexander and Beverly Guy-Sheftall and reflections about Hill by the historian John Hope Franklin, Duke’s basketball coach Mike Krzyzewski, and the sportswriter William C. Rhoden. Hill and his father, the NFL great Calvin Hill, contribute a dialogue that explores their motivations for collecting art.
At the heart of the book are the exquisite color photographs of the forty-six artworks included in the exhibition, with commentary by Wardlaw and by Hill himself.
As a star athlete, Grant Hill is well aware that African Americans who excel in sports and entertainment are more broadly recognized than their counterparts in artistic fields. He strives to inspire young people to explore their heritage and broaden their concept of excellence by learning more about African American art. By sharing his artworks with collectors and fans, Hill reminds us that while the jump shot is ephemeral, art is enduring.

Books similiar to Something All Our Own: The Grant Hill Collection of African American Art may be found in the categories below: