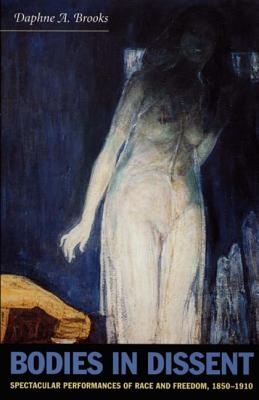 Bodies in Dissent: Spectacular Performances of Race and Freedom, 1850-1910
by Daphne A. Brooks

In Bodies in Dissent Daphne A. Brooks argues that from the mid-nineteenth century to the early twentieth, black transatlantic activists, actors, singers, and other entertainers frequently transformed the alienating conditions of social and political marginalization into modes of self-actualization through performance. Brooks considers the work of African American, Anglo, and racially ambiguous performers in a range of popular entertainment, including racial melodrama, spectacular theatre, moving panorama exhibitions, Pan-Africanist musicals, Victorian magic shows, religious and secular song, spiritualism, and dance. She describes how these entertainers experimented with different ways of presenting their bodies in public-through dress, movement, and theatrical technologies-to defamiliarize the spectacle of "blackness" in the transatlantic imaginary.

Brooks pieces together reviews, letters, playbills, fiction, and biography in order to reconstruct not only the contexts of African American performance but also the reception of the stagings of "bodily insurgency" which she examines. Throughout the book, she juxtaposes unlikely texts and entertainers in order to illuminate the complicated transatlantic cultural landscape in which black performers intervened. She places Adah Isaacs Menken, a star of spectacular theatre, next to Sojourner Truth, showing how both used similar strategies of physical gesture to complicate one-dimensional notions of race and gender.

She also considers Henry Box Brown’s public re-enactments of his escape from slavery, the Pan-Africanist discourse of Bert Williams’s and George Walker’s musical In Dahomey (1902-04), and the relationship between gender politics, performance, and New Negro activism in the fiction of the novelist and playwright Pauline Hopkins and the postbellum stage work of the cakewalk dancer and choreographer Aida Overton Walker. Highlighting the integral connections between performance and the construction of racial identities, Brooks provides a nuanced understanding of the vitality, complexity, and influence of black performance in the United States and throughout the black Atlantic.