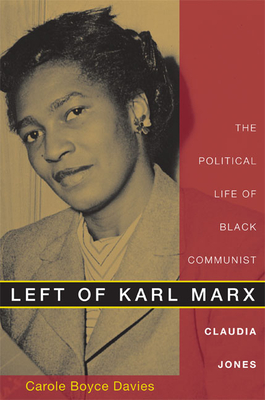 Book Description:
In Left of Karl Marx, Carole Boyce Davies assesses the activism, writing, and legacy of Claudia Jones (1915-1964), a pioneering Afro-Caribbean radical intellectual, dedicated communist, and feminist. Jones is buried in London’s Highgate Cemetery, to the left of Karl Marx-a location that Boyce Davies finds fitting given how Jones expanded Marxism-Leninism to incorporate gender and race in her political critique and activism.

Claudia Cumberbatch Jones was born in Trinidad. In 1924, she moved to New York, where she lived for the next thirty years. She was active in the Communist Party from her early twenties onward. A talented writer and speaker, she traveled throughout the United States lecturing and organizing. In the early 1950s, she wrote a well-known column, "Half the World," for the Daily Worker. As the U.S. government intensified its efforts to prosecute communists, Jones was arrested several times. She served nearly a year in a U.S. prison before being deported and given asylum by Great Britain in 1955. There she founded The West Indian Gazette and Afro-Asian Caribbean News and the Caribbean Carnival, an annual London festival that continues today as the Notting Hill Carnival. Boyce Davies examines Jones’s thought and journalism, her political and community organizing, and poetry that the activist wrote while she was imprisoned. Looking at the contents of the FBI file on Jones, Boyce Davies contrasts Jones’s own narration of her life with the federal government’s. Left of Karl Marx establishes Jones as a significant figure within Caribbean intellectual traditions, black U.S. feminism, and the history of communism.

More books like Left of Karl Marx: The Political Life of Black Communist Claudia Jones may be found by selecting the categories below: