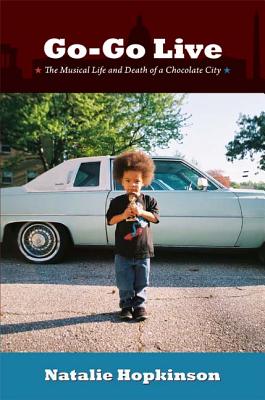 Go-Go Live: The Musical Life and Death of a Chocolate City
by Natalie Hopkinson

Book Description:
Go-go is the conga drum inflected black popular music that emerged in Washington, D.C., during the 1970s. The guitarist Chuck Brown, the "Godfather of Go-Go," created the music by mixing sounds borrowed from church and the blues with the funk and flavor that he picked up playing for a local Latino band. Born in the inner city, amid the charred ruins of the 1968 race riots, go-go generated a distinct culture and an economy of independent, almost exclusively black-owned businesses that sold tickets to shows and recordings of live go-gos. At the peak of its popularity, in the 1980s, go-go could be heard around the capital every night of the week, on college campuses and in crumbling historic theaters, hole-in-the-wall nightclubs, backyards, and city parks.Go-Go Live is a social history of black Washington told through its go-go music and culture. Encompassing dance moves, nightclubs, and fashion, as well as the voices of artists, fans, business owners, and politicians, Natalie Hopkinson’s Washington-based narrative reflects the broader history of race in urban America in the second half of the twentieth century and the early twenty-first. In the 1990s, the middle class that had left the city for the suburbs in the postwar years began to return. Gentrification drove up property values and pushed go-go into D.C.’s suburbs. The Chocolate City is in decline, but its heart, D.C.’s distinctive go-go musical culture, continues to beat. On any given night, there’s live go-go in the D.C. metro area.

More books like Go-Go Live: The Musical Life and Death of a Chocolate City may be found by selecting the categories below:

Tell us what do you think about Go-Go Live: The Musical Life and Death of a Chocolate City.