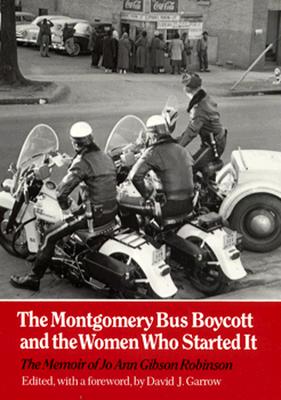 Montgomery Bus Boycott and the Women Who Started It: The Memoir of Jo Ann Gibson Robinson
by Jo Ann Robinson

Book Description:
The Montgomery Bus Boycott, which ignited the civil rights movement of the 1950s and 1960s, has always been vitally important in southern and black history. With the publication of this book, the boycott becomes a milestone in the history of American women as well.
"This autobiographical account of the creation of the boycott is the most important document on that highly significant episode since Martin Luther King’s own version, Stride Towards Freedom. I feel certain that scholars and students will refer to this unique historical source for generations to come."
—J. Mills Thornton, University of Michigan
"This valuable first-hand account of the historic Montgomery Bus Boycott, written by an important, behind-the-scenes organizer, evokes the emotional intensity of the civil rights struggle. It ought to be required reading for all Americans who value their freedom and the contribution of black women to our history."
—Coretta Scott King
"A sharply remembered addition to the literature on what has become an event of mythic proportions, and a sound primer for those interested in community organizing. The author is scrupulously honest, modest, and gives unsung heroes much deserved praise."
—Kirkus
"This fascinating memoir provides new evidence on the origins and sustaining force of the Montgomery Bus Boycott (1955-56)."
—Anthony O. Edmonds, Library Journal
"There’s no substitute for this intimate memoir; it provides an immediacy and graphic intensity never before available."
—Marge Frantz, San Jose Mercury News
"This powerful memoir is a milestone in the history of that boycott and in the American Civil Rights Movement."
—American History Illustrated
"This absorbing study may become a minor classic in the literature of the Montgomery bus boycott. . . . Garrow correctly states in his Foreword that this book is the most important participant-observer account of the Montgomery protest available to students and scholars of the black freedom movement. . . . This straightforward, sensitive memoir is must reading for students of the civil rights movement. It is a powerful commentary on how a woman and the group she led rose up to throw off an injustice thrust upon them. When Jo Ann Robinson and other Montgomery women decided no longer to play the role of contented black Southerners, they gave blacks everywhere renewed hope, and they helped to create a national leader who took them closer to the promised land."
Jimmie L. Franklin, The Alabama Review
"In an absorbing, first-hand narrative, the dignified and unassuming Robinson focuses on the role of the Women’s Political Council (WPC) and details the WPC’s plans to engineer a boycott months before the heralded arrest of Rosa Parks. . . . The value of this primary source will endure long after many best-selling, secondary accounts of national politics during this period have disappeared."
Keith D. Miller and Elizabeth Vander Lei, Explorations in Sight and Sound"

More books like Montgomery Bus Boycott and the Women Who Started It: The Memoir of Jo Ann Gibson Robinson may be found by selecting the categories below:

Tell us what do you think about Montgomery Bus Boycott and the Women Who Started It: The Memoir of Jo Ann Gibson Robinson.