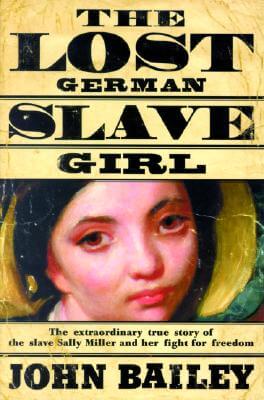 The Lost German Slave Girl: The Extraordinary True Story Of Sally Miller And Her Fight For Freedom in Old New Orleans
by John Bailey

Read Our Review of The Lost German Slave Girl: The Extraordinary True Story Of Sally Miller And Her Fight For Freedom in Old New Orleans

Hardcover Description:
It is a spring morning in New Orleans, 1843. In the Spanish Quarter, on a street lined with flophouses and gambling dens, Madame Carl recognizes the face of a German girl who disappeared twenty-five years earlier. But the olive-skinned woman is a slave, with no memory of a "white" past. And yet her resemblance to her mother is striking, and she bears two telltale birthmarks. Had a defenseless European orphan been illegally enslaved, or was she an imposter? So begins one of the most celebrated and sensational trials of nineteenth-century America. In brilliant novelistic detail, award-winning historian John Bailey uses Miller’s dramatic trial to describe the fascinating laws and customs surrounding slavery, immigration, and racial mixing. Did Miller, as her relatives sought to prove, arrive from Germany under perilous circumstances as an indentured servant or was she, as her master claimed, a slave for life? The trial pits a humble community of German immigrants against a hardened capitalist and one of the most flamboyant lawyers of his time. Bailey follows the case’s incredible twists and turns all the way to the Supreme Court and comes to a shocking conclusion in this investigative history that reads like a suspense novel.

More books like The Lost German Slave Girl: The Extraordinary True Story Of Sally Miller And Her Fight For Freedom in Old New Orleans may be found by selecting the categories below: