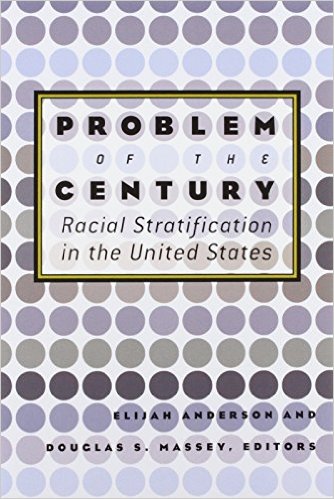 Problem Of The Century: Racial Stratification In The United States
by Elijah Anderson and Douglas Massey

Paperback Description:
In 1899 the great African American scholar, W.E.B. DuBois, published The Philadelphia Negro, the first systematic case study of an African American community and one of the foundations of American sociology. DuBois prophesied that the color line would be the problem of the twentieth century. One hundred years later, Problem of the Century reflects upon his prophecy, exploring the ways in which the color line is still visible in the labor market, the housing market, education, family structure, and many other aspects of life at the turn of a new century.The book opens with a theoretical discussion of the way racial identity is constructed and institutionalized. When the government classifies races and confers group rights upon them, is it subtly reenforcing damaging racial divisions, or redressing the group privileges that whites monopolized for so long? The book also delineates the social dynamics that underpin racial inequality. The contributors explore the causes and consequences of high rates of mortality and low rates of marriage in black communities, as well as the way race affects a person’s chances of economic success. African Americans may soon lose their historical position as America’s majority minority, and the book also examines how race plays out in the sometimes fractious relations between blacks and immigrants. The final part of the book shows how the color line manifests itself at work and in schools. Contributors find racial issues at play on both ends of the occupational ladder—among absentee fathers paying child support from their meager earnings and among black executives prospering in the corporate world. In the schools, the book explores how race defines a student’s peer group and how peer pressure affects a student’s grades.Problem of the Century draws upon the distinguished faculty of sociologists at the University of Pennsylvania, where DuBois conducted his research for The Philadelphia Negro. The contributors combine a scrupulous commitment to empirical inquiry with an eclectic openness to different methods and approaches. Problem of the Century blends ethnographies and surveys, statistics and content analyses, census data and historical records, to provide a far-reaching examination of racial inequality in all its contemporary manifestations.

More books like Problem Of The Century: Racial Stratification In The United States may be found by selecting the categories below: