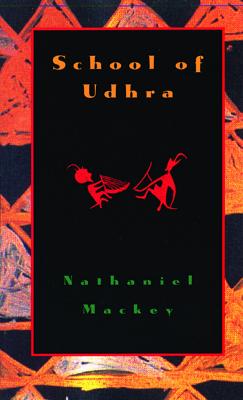 School of Udhra
by Nathaniel Mackey

Book Description:
School of Udhra takes its title from the Bedouin poetic tradition associated with the seventh-century Arab poet Djamil, the Udhrite school of poets who, ?when loving die.” Bedouin tradition, however, is only one of the strands of world revery these poems have recourse to. They obey a ?bedouin” impulse of their own?fugitive, moving on, nomadic. Ogo the fox, the Dogon avatar of singleness and unrest, runs throughout, crossing and recrossing divided ground, primal isolate, insistent within the book’s cross-cultural weave.The poems track variances of union and disunion- social, sexual, mystic, mythic- both formally and in their content. They return rhapsody to its root sense: stitching together. Threads ranging through ancient Egypt, shamanic Siberia, Rastafarian Jamaica, and elsewhere figure in, inflected by conjunctive and disjunctive cadences inspired by jazz, Gnaoua trance-chant, cante jando, and other musics."’Purgatorial stealth’ (as School of Udhra puts it), within a startling progression, I find, of imageries, becomes the poem’s enigmatic seductive, sometimes wavering, sliding traverse of a spiritual wilderness. I have no doubt that the book is a remarkable and daring testament that needs to be read and re-read for the unpredictable measure of involved enchantment it unfolds . . . A book of haunted pleasure." ?Wilson Harris, Palace of the Peacock"Nathaniel Mackey has said that in language we inherit the voices of the dead. In School of Udhra he transcribes immeasurable spaces of the dispossessed who call him runaway. This writing increasingly unleashes each skittish letter into the risk of syllabic stutter ’vatic scat’ stagger. How else ever re-trace or re-member the speaker of a ghost in sentences we step across. Words or segments of lines, stab, cut, rift, rend, relate, blaspheme, and bless." ?Susan Howe, My Emily DickinsonNathaniel Mackey, recipient of a 1993 Whiting Writers’ Award, is the author of Eroding Witness (1985), Whatsaid Serif (City Lights, 1998), Atet A.D. (City Lights, 2001), Bedouin Hornbook (1986), and Djbot Baghosus’s Run (1993), as well as Discrepant Engagement: Dissonance Cross-Culturality, and Experimental Writing (1993). He has taught at the University of California, Santa Cruz and Duke University.

More books like School of Udhra may be found by selecting the categories below:

Tell us what do you think about School of Udhra.