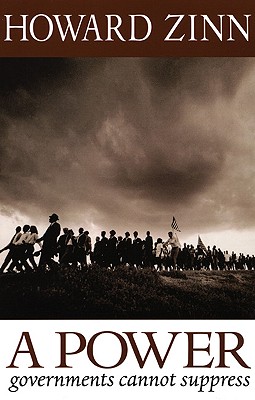 Book Description:
"Thank you, Howard Zinn. Thank you for telling us what none of our leaders are willing to: The truth. And you tell it with such brilliance, such humanity. It is a personal honor to be able to say I am a better citizen because of you."
— Michael Moore, director of the film Fahrenheit 9/11, and author of the New York Times bestseller, Stupid White Men …and Other Sorry Excuses for the State of the Nation!

"This strong, incisive book by Howard Zinn provides us with a penetrating critique of current U.S. policies and embraces the sweep of history. Zinn’s inspired voice sets him apart … which is why so many of us look to Howard as a modern-day Thoreau. As always with Zinn’s work, A Power Governments Cannot Suppress leaves us with the faith that citizens have what it takes to confront power and to reverse the dangerous and unjust acts of our government."
— Jonathan Kozol, author of The Shame of The Nation: The Restoration of Apartheid Schooling in America

"Find here the voice of the well-educated and honorable and capable and human United States of America, which might have existed if only absolute power had not corrupted its third-rate leaders so absolutely."
— Kurt Vonnegut, author of A Man Without a Country

"Howard Zinn is a unique voice of sanity, clarity and wisdom who reads history not only to understand the present but to shape the future. …Profoundly insightful… A Power Governments Cannot Suppress should be read by every American, over and over again."
— Michael Lerner, editor of Tikkun Magazine, author of The Left Hand of God: Taking Back our Country from the Religious Right

“This brilliant new book—like Howard Zinn’s presence, and his whole life, is the best possible antidote to political despair. Read it, and rejoin the struggle for a human world and a foreign policy that’s good for children.”
—Daniel Ellsberg released the Pentagon Papers in 1971 and is author of Secrets: A Memoir of Vietnam and the Pentagon Papers

A Power Governments Cannot Suppress, is a major new collection of essays on American history, class, immigration, justice, and ordinary citizens who have made a difference. Zinn addresses America’s current political/ethical crisis using lessons learned from our nation’s history. Zinn brings a profoundly human, yet uniquely American perspective to each subject he writes about, whether it’s the abolition of war, terrorism, the Founding Fathers, the Holocaust, defending the rights of immigrants, or personal liberties. Written in an accessible, personal tone, Zinn approaches the telling of U.S. history from an active, engaged point of view. "America’s future is linked to how we understand our past,” writes Zinn; "For this reason, writing about history, for me, is never a neutral act."

Zinn frames the book with an opening essay titled "If History is to be Creative," a reflection on the role and responsibility of the historian. "To think that history-writing must aim simply to recapitulate the failures that dominate the past," writes Zinn, "is to make historians collaborators in an endless cycle of defeat." "If history is to be creative, to anticipate a possible future without denying the past, it should, I believe, emphasize new possibilities by disclosing those hidden episodes of the past when, even if in brief flashes, people showed their ability to resist, to join together, and occasionally win. I am supposing, or perhaps only hoping, that our future may be found in the past’s fugitive moments of compassion rather than in its solid centuries of warfare."

Buzzing with stories and ideas, Zinn draws upon fascinating, little-known historical anecdotes spanning from the Declaration of Independence to the USA PATRIOT Act to comment on the most controversial issues facing us today: government dishonesty, how to respond to terrorism, the wars in Iraq and Afghanistan, the loss of our liberties, immigration, and the responsibility of the citizen to confront power for the common good.

Considered a "modern-day Thoreau" by Jonathon Kozol, Zinn’s inspired writings address the reader as an active participant in history making. "We live in a beautiful country,” writes Zinn, in the book’s opening chapter. “But people who have no respect for human life, freedom, or justice have taken it over. It is now up to all of us to take it back."

Featuring essays penned over an eight-year period, A Power Governments Cannot Suppress is Howard Zinn’s first writerly work in several years, an invaluable post-9/11-era addition to the themes that run through his bestselling classic, A People’s History Of the United States.

Howard Zinn is a veteran of World War II and author of many books and plays, including the milli

More books like A Power Governments Cannot Suppress may be found by selecting the categories below:

Tell us what do you think about A Power Governments Cannot Suppress.