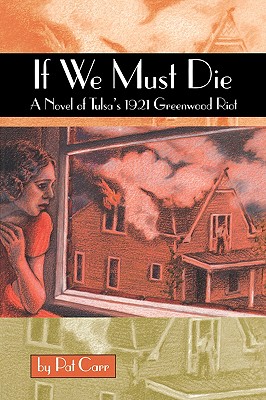 If We Must Die: A Novel of Tulsa’s 1921 Greewood Riot
by Pat Carr

Paperback Description:
For decades, a riot that killed three hundred people and wounded hundreds of others was scarcely heard of. But several new studies have focused attention on Tulsa’s Greenwood race riot of 1921. In If We Must Die novelist Pat Carr turns that tragedy into a riveting novel. When Berneen O’Brien’s mother dies, the seventeen-year-old moves from Wyoming to Tulsa to live with her stern uncle. Berneen secures a teaching position at Liberty Elementary School. When she meets the principal, Nelson Flowers, she is amazed to find that he is a black man. Slowly, as she meets the other teachers, Berneen realizes that she is teaching in a black school. Her worries about being an outcast soon disappear, as the other teachers make her welcome. Berneen, who is of Black-Irish descent, doesn’t realize that the teachers and students all assume she is also black. At school and after hours Berneen finds herself moving in the world of the segregated Greenwood neighborhood. And she finds herself increasingly drawn to Nelson Flowers. Racial tension erupts into violence when a young white girl accuses a black shoeshine boy of raping her in an office-building elevator. Whites burn Greenwood and storm the neighborhood, shooting and beating black men, women, and children. Berneen is trapped in the school with Nelson Flowers and the teachers when the mob approaches. The story of their desperate attempt to escape is realistic and frightening, made more so by its historical accuracy. This novel is both insightful and a real page-turner.

Books similiar to If We Must Die: A Novel of Tulsa’s 1921 Greewood Riot may be found in the categories below: