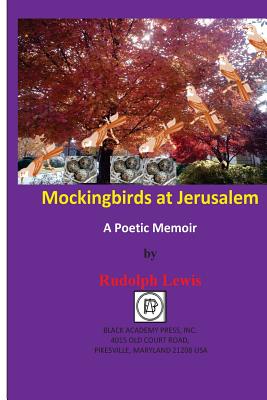 Mockingbirds At Jerusalem: A Poetic Memoir
by Rudolph Lewis

Read Our Review of Mockingbirds At Jerusalem: A Poetic Memoir

From the Introduction
This poetic memoir recalls the place of my childhood, which was informed by a life of integrity and dignity, character qualities of maternal grandparents who taught me a respect for words, stories that shored up life diminished by ideas of separation and inferiority. It was a rural hamlet, named Jerusalem, founded in 1870, in Virginia’s poorest county, Sussex. It offered grudgingly little in fields and forests, vision warped by slavery and Jim Crow.

This distorted place could and will never be one of permanence for a smart black boy. He will always seek to fulfill his self in other spaces. Jerusalem generates exiles. Beginning mid-1960s, I sought housing with indoor toilets and tap water, and joy in America’s urban centers, and in a neo-colonial Congo, in New Orleans with poets, artists, musicians, educators, and priests. I worked as porter, teacher, journalist and librarian, studied modern art, listened to jazzmen, and passed out words against war and injustice during the American war against the Viet Cong.

When my exiled world became too cold and depressing to bear, I returned home to my grandmother’s voice—her stories and songs. Most of these poems were first written in 2006 and have been in revision for seven years. They begin with a poem to my grandfather, William “Tinka” Lewis, who raised me as his son and died in 1970. There are many poems that call up my grandmother, Ella Lewis, whom I called “Mama” and from whom I learned our family history. In poor health she was suffering loss of weight and dementia. Her daughter Annie made her comfortable in that home she and Tinka built in the late 1950s. The last family member of her generation, Mama had seen two of her daughters pass before her, and in the spring of 2008 both her son-in-law and then the daughter that bore me also passed. She was too ill to travel to Baltimore for either funeral. And in 2009 I became ill and she passed that December, a month after I married Yvonne Terry. I attempt to capture some of that disruptive beauty in these poems.

I owe an eternal debt to my maternal grandparents and their Jerusalem and all that made it live—our kinfolks, the dirt roads, the church community, Creath school, our neighbors, the gardens; barnyards and their pigs, mules, and chickens; the weather, dark purple nights with its stars. In this memoir I’ve tried to translate that beauty, horror, and wonder (and its end) into a contemporary idiom others may know. I spent much of my time at the woodshed with Bobo Cat if not chopping wood, meditating, reading, and taking notes. I read the Autobiography of Amiri Baraka, Aldon Nielsen’s Black Chant, and Nina Simone’s I Put a Spell on You. Some of the poems reflect those readings, like “Showdown at the Five Spot” and “I Put a Spell on We.” The memoir recalls also Nathaniel Turner, the prophet of Southampton, who among others began the continuing tradition of the week-long August revival. Several poems sketch out the tragic death and funeral of Carter a multiracial child, the sadness of his mother and stepfather. “Ode for Walls,” an ironical/symbolical poem, brings the memoir to a close.

More books like Mockingbirds At Jerusalem: A Poetic Memoir may be found by selecting the categories below: