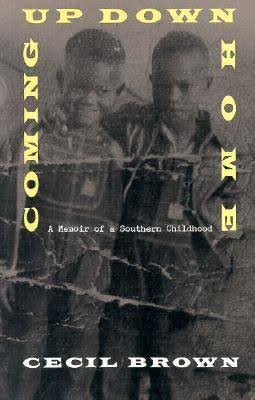 Coming Up Down Home: A Memoir of a Southern Childhood
by Cecil Brown

Paperback Description:In this engrossing memoir, novelist Cecil Brown, author of the highly acclaimed The Life and Loves of Mr. Jiveass Nigger, has written a lively and poignant account of his childhood in the small farming village of Bolton, North Carolina. Raised by a loving aunt and uncle, Brown evokes a lost world of rural southern America in the late forties and early fifties as he mischievously romps with his brother Cornelius through the cotton fields, churches, and houses of the tiny community populated by such vivid characters as Uncle Sugarboy, Geechie Collins, June Bug, Juicy Belle, and Miss Commie. But beyond the seeming small-town innocence and the insular bonds of his extended family, a growing awareness of prejudice and institutional racism leads young Cecil to a painful confrontation with his father’s tragic past and his desire for Cecil to stay home on the farm. Finding respite and encouragement first in the simple illusions of magic, which provide valuable insights into surviving in the white man’s world, then in jazz, in which a saxophone becomes a ticket to New York City, and, finally, in higher education, he struggles to break free of his family’s violent history and from the land that was for so long their salvation. Reminiscent of Richard Wright’s Black Boy and Maya Angelou’s I Know Why the Caged Bird Sings, Coming Up Down Home is an evocative personal odyssey that mirrors this country’s larger struggle with racism and violence that culminated in the marches and boycotts of the early 1960s. Steeped in the rich traditions, vivid folklore, and brutal history of rural African-Americans, it documents the coming of age of a young man as he sorts through dignity to arrive at a deeperunderstanding of the black identity in America.

More books like Coming Up Down Home: A Memoir of a Southern Childhood may be found by selecting the categories below: