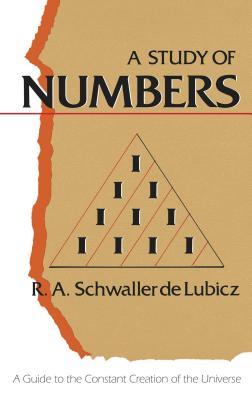 A Study of Numbers: A Guide to the Constant Creation of the Universe
by R. A. Schwaller de Lubicz

Book Description:
We lack direct consciousness of Space and Time. We can know of them only indirectly by mass, force, and energy, and by the intermediary of phenomena such as may be tested by our five senses. Without direct awareness of Space or Time, human beings lack two “senses” necessary for the knowledge of all causes. From this imperfection, of which we are always being made aware, is born our need to simplify. Thus we reduce everything to fundamental properties, without paying any attention to the underlying universal organization, the effects of which are all around us.

The result is that the science of numbers, the most wonderful guide to the constant creation of the universe, remains an enormous hypothesis so long as its use has not awakened in us the higher consciousness of a universal order. By deepened knowledge of things and their process of becoming, we must come to recognize Numbers as a truth, and to experience with our senses the living relation of a cause to an effect, this relation being truer and more real than the effect could ever be.

Published in 1917 under the author’s given name of Ren Schwaller, A Study of Numbers is the first expression of the teachings we have come to associate with his later and better known name, R.A. Schwaller de Lubicz. It is a masterly account of the living, universal, qualitative, and casual reality of numbers.

Starting from the irreducible one, Schwaller deals with the unfolding of creation through the cycles of polarization, ideation, and formation. Topics covered include: numbers, values, and relations; the disengagement of numbers; the harmonic basis of numbers; the development of values; and the establishment of harmony.

More books like A Study of Numbers: A Guide to the Constant Creation of the Universe may be found by selecting the categories below:

Tell us what do you think about A Study of Numbers: A Guide to the Constant Creation of the Universe.