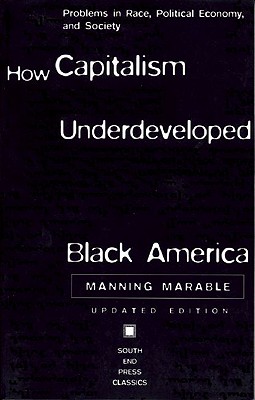 Book Description:
ContentsPreface
How Capitalism Underdeveloped Black America A Critical Assessment
Introduction to the First Edition
Part 1 The Black Majority
Chapter 1 The Crisis of the Black Working Class
Chapter 2 The Black Poor
Chapter 3 Grounding with My Sisters
Chapter 4 Black Prisoners and Punishment in a Racist/Capitalist State
Part 2 The Black Elite
Chapter 5 Black Capitalism
Chapter 6 Black Brahmins
Chapter 7 The Ambiguous Politics of the Black Church
Chapter 8 The Destruction of Black Education
Part 3 A Question of Genocide
Chapter 9 The Meaning of Racist Violence in Late Capitalism
Chapter 10 Conclusion: Towards a Socialist AmericaReviews"Manning Marable examines developments in the political economy of racism in the United States and assesses shifts in the American Political terrain since the first edition….He is one of the most widely read Black progressive authors in the country."-Black Employment Journal"The reissue of Manning Marable’s How Capitalism Underdeveloped Black America confirms that this is a classic work of political history and social criticism. Unfortunately, Marable’s blistering insights into racial injustice and economic inequality remain depressingly relevant. But the good news is that Marable’s prescient analysis-and his eloquent and self-critical preface to this new edition-will prove critical in helping us to think through and conquer the oppressive forces that remain."-Michael Eric Dyson, author of I May Not Get Therewith You: The True Martin Luther King, Jr."For those of us who came of political age in the 1980s, Manning Marable’s How Capitalism Underdeveloped Black America was one of our bibles. Published during the cold winter of Reaganism, he introduced a new generation of Black activists/thinkers to class and gender struggles within Black communities, the political economy of incarceration, the limitations of Black capitalism, and the nearly forgotten vision of what a socialist future might look like. Two decades later, Marable’s urgent and hopeful voice is as relevant as ever."-Robin D.G. Kelley, author of Yo’ Mama’s DisFunktional!:

More books like How Capitalism Underdeveloped Black America: Problems in Race, Political Economy, and Society (South End Press Classics Series) may be found by selecting the categories below: