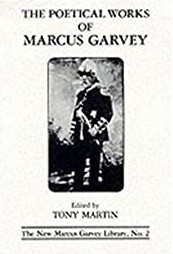 The Poetical Works of Marcus Garvey
by Tony Martin

Marcus Garvey was many things race leader, journalist, orator and ideologist. He was also a poet, and his poetical works are collected here for the first time. From a purely literary standpoint, he inspired better poetry than he himself produced. Even so, however, he could still justify the attempt, for he saw verse as an important supplementary vehicle for propagating his ideas. And these are the ideas upon which the world’s greatest Pan-African movement was built.

A great many people have been surprised and pleased at discovering that the Honorable Marcus Garvey, President-General of the Universal Negro Improvement Association, is a poet of high order: that is, that he possesses in large measure the divine power of expressing himself in the language of poetry, which a distinguished authority has declared to be the sublimest expression of the human soul after perfection. Only those who have suffered greatly or felt the ecstacies of joy in its highest and purest form, are capable of reaching the depths in poetic expression which affect and move great masses of people.