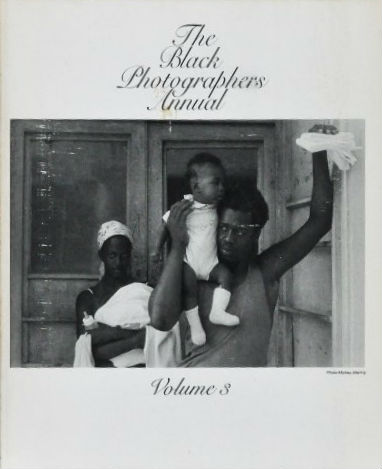 “…a study of means, and styles, of confrontation — past, present, and, also, alas, to come.“James Baldwin, introduction to Volume 3

Beuford Smith, who cofounded The Black Photographers Annual with Joe Crawford, has made these books available online for two years (2017–2019). Visit the Virginia Museum of Fine Arts to review the online version of this book.

In 1973 a group of African American photographers in New York City published the first volume of The Black Photographers Annual. Concurrent with the Black Arts Movement of the 1960s and early 1970s, which encouraged the establishment of autonomous, black-owned publications to support black artists, the annual highlighted the work of forty-nine photographers. The majority of these images featured black subjects, photographed from a wide array of personal perspectives and expressed through a multitude of artistic styles.

Most of the picture editors for the first volume of The Black Photographers Annual were members of the Kamoinge Workshop, a collective of African American photographers that had formed a decade earlier. (In the language of Kenya’s Kikuyu people, kamoinge means “to work together.”) While the forty-nine artists featured in the publication far exceeded the boundaries of the collective, the idea for the project emerged from a decade of conversations within the group about expanding opportunities for African American photographers.Virginia Museum of Fine Arts