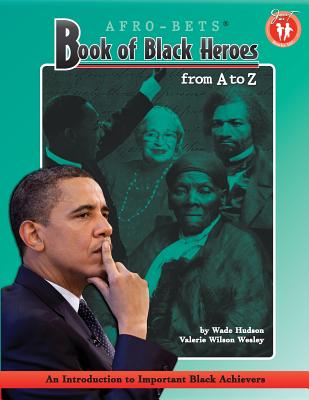 Book of Black Heroes from A to Z: An Introduction to Important Black Achievers for Young Readers
by Wade Hudson

Paperback Description:
NEW EDITION From science to politics, civil rights to entertainment, historic times to present day, men and women across the African diaspora have made important contributions to our world. Book of Black Heroes from A to Z shares with young readers the stories 54 pioneers whose courage, strength and lasting accomplishments have earned them the title hero. Read about: Arctic explorer Matthew Henson South African human rights advocate Nelson Mandela Liberian President Ellen Sirleaf Johnson Pioneering Black historian Benjamin Quarles Discover how: Jackie Robinson integrated Major League Baseball Richard Allen went from enslavement to co-founder and Bishop of the African Methodist Episcopal Church Jean Baptiste DuSable, a Haiti-born fur trader, founded the city of Chicago Constance Baker Motley helped James Meredith become the first black person to go to the University of Mississippi First published in 1988 and with more than 400,000 copies in print, Book of Black Heroes from A to Z has become a go to black history staple in classrooms, homes and libraries. This updated edition includes expanded biographies, quotes and factoids, a two-page narrative honoring the 150th anniversary of the enactment of the Emancipation Proclamation and several new entries including a profile of President Barack Obama, the first African American elected President of the United States. Whether their names are familiar or new, the journeys and many achievements of Book of Black Heroes honorees are truly inspiring and can help all children realize that even in the face of obstacles, they too can make important contributions to our world.