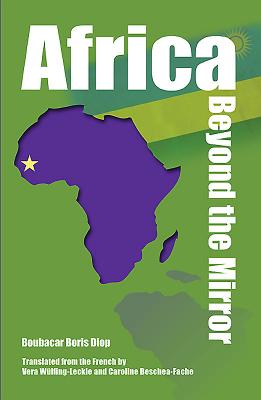 Africa Beyond the Mirror
by Boubacar Boris Diop

Book Description:
The media tends to portray Africa in a manner that grossly distorts reality. The picture they paint is intended to make people of African descent feel ashamed of their past and their identity. This is unacceptable and must change. It is therefore a moral imperative for all those who can make themselves heard, to speak out. These texts reflect the point of view of an African intellectual who has selected them for this book since they were all born out of the desire to tell the truth as it is. Besides chapters that pay homage to Cheikh Anta Diop and Mongo Beti, the wide variety of topics in this book include the dilemma of the writer who is stuck between two languages, the shipwreck of the Joola in Senegal, the continuing waves of migration towards Europe and the cultural challenges of globalization. The genocide of the Tutsis in Rwanda, which too many people are still trying to deny, has been given special importance. The implication of the French government is stressed, because its responsibility in this tragedy, via Fran ois Mitterrand, is neither well-known nor accepted, despite all the irrefutable evidence. Projecting one’s gaze beyond the mirror means trying to expose the lies that hide behind so many clich s that are common currency about Africa. Above all, it means ringing the alarm bell as a warning against the sinister political intentions that feed a growing Afrophobia.

Tell us what do you think about Africa Beyond the Mirror.